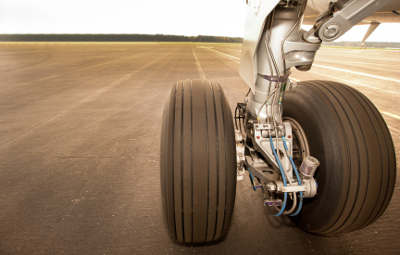 This sounds like the ultimate in the circular economy, but theoretically it can be achieved using the tire recycling process pioneered by Green Distillation Technologies, an Australian company which was awarded a bronze medal two years ago in the Edison Awards, rated as the world’s top prize for innovation.

Most commercial aircraft tires are managed for the airline by an external supplier which provides changes after so many landings and take-offs and then either has them re-treaded for further use, crumbed for playgrounds and sporting fields or used as furnace fuel.

Aircraft tires only contain a small quantity of steel reinforcing so the GDT recycling process will mostly produce oil and carbon, with the oil being a light low sulphur crude that can easily be refined into bio jet fuel.

Carbon, in the form of carbon black, is one of the world’s most widely used chemical building blocks which is used in many products ranging from tires, where it not only provides the black colouring, but strength, durability and heat resistance as well. It is also used in plastics and paints, water filtration, printing ink, paint, electrodes, graphene, toothpaste and cosmetics including eyeliner, mascara, nail polish, eye shadow, blushes, rouge and lipstick.

Commercial carbon black is usually derived from heavy crude oil which is burnt to produce the fine black powder, but this new approach to tyre recycling now has developed an alternative.

There is no shortage of raw material as there are plenty of old commercial aircraft tires available as they need replacing after six months or 300 landings with a Boeing 777 having 14 tires, an A380, 22 and an AN225, a whopping 32 tires, not to say the thousands of old tires discarded by general aviation and recreational flyers.

Green Distillation Technologies Chief Operating Officer Trevor Bayley, who holds a commercial pilot’s licence and has a background in the air freight industry, agreed that recycling end of life aviation tires into bio jet fuel sounded like the ultimate in the circular economy, but was a very practical solution to a world-wide problem.

“Currently most old aircraft tires finish their life being crumbed and used in playgrounds and sporting fields or burnt as furnace fuel, but there is a limit on how many can be recycled in this way.

“There is also the potential for a future environmental disaster caused by the residues from burning old tires, even in modern furnaces. It is also a negligent waste of a valuable resource that could be refined as jet fuel and other oil based products,” he said.

Trevor Bayley added: “We developed our technology at our processing facility in Warren, Western New South Wales and have been perfecting our approach since 2009 and are now poised to commence commercial production.

“The process, which we call ‘destructive distillation’, has attracted enquiries from industries world-wide that face the problem of what to do with their end of life tires.

“Unfortunately, modern manufacturers produce tires that are virtually indestructible so that we now have an environmental problem of biblical proportions with an estimated one and a half billion old tires around the world, many of which finish up being dumped in forests and streams, as well as landfill.

‘As well as creating an environmental problem, old tires create a health hazard in tropical regions as they harbour water that provides the perfect habitat for breeding mosquitoes that spread, malaria, dengue fever and the Zika virus.

“Despite the best efforts of those who favour crumbing and burning as a method of disposal, the world pile of old tires just keeps getting bigger and bigger,” Trevor Bayley said.

About Green Distillation Technologies Corporation: GDT is an Australian company which has developed world-first technology to recycle end‐of‐life aircraft, car and truck and now oversize tires into carbon, oil and steel.