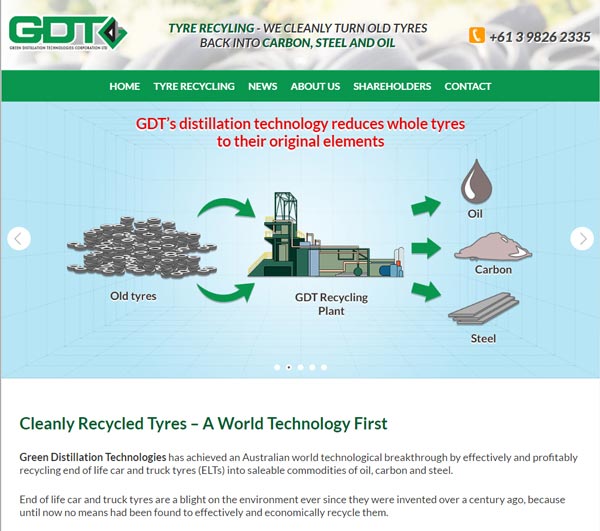 CEO Craig Dunn said that the website will be an active one with social media feeds, interesting articles, an email newsletter and a growing set of illustrations that show their ‘destructive distillation’ process in a non-technical way. Investors will have their own private area on the site, which will keep them in the loop with noteworthy financial and internal developments.

“It has been our intention to keep the website simple and easy to understand as we recognise that the enormous environmental problem caused by end-of-life tyres is something that concerns everyone in the community. ”

“The world-wide environmental problem caused by discarded tyres was graphically illustrated a couple of days ago by a massive fire in a tyre dump in Madrid, Spain where 150,000 tonnes of tyres are ablaze causing the evacuation of 9,000 people.

“There are some tyre dumps in Australia of this size and we believe that our technology can be used to covert this dangerous waste into highly valuable oil, carbon and steel.

“Currently, we are developing the materials handling logistics at our plant in Warren, New South Wales to handle those extra-large ‘off the road’ tyres (OTRs) used by heavy duty mining dump trucks, large agricultural tractors and road making equipment with a tyre that weighs 4 tonnes yielding 1,740 litres of oil, 1.6 tonnes of carbon, as well as the steel reinforcing which goes back to the tyre manufacturer for reuse.

“The Hider Report in 2013-14 estimated that there are 155,000 tonnes of OTR end-of-life tyres of various sizes generated in Australia each year of which 79.4 per cent are left on site and there are no means of recycling them.

“We have signed an agreement with Perth-based Tytec Logistics which provides logistics, storage and remanufacturing for OTR tyres as currently there are no means of recycling these very large tyres and the usual means of disposal is burial in a dump on the mine site, or in an EPA nominated dump. The longitude and latitude of the dump together with the serial number of each tyre is provided to the EPA. “The world’s first full scale processing plant for OTR tyres will be built in Perth in 2017 and there will be a need for other OTR plants in Australia, as well as the United States and South America,” Craig Dunn said.

About Green Distillation Technologies: GDT is an Australian company which has developed world-first technology to recycle end‐of‐life car and truck tyres into carbon, oil and steel.