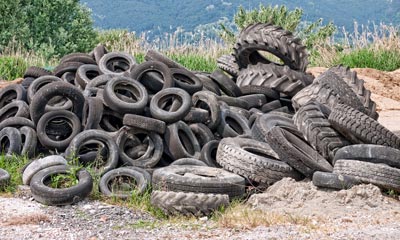 The projected estimate of more than one million old tyres in the Toowoomba area will create a massive environmental problem according to Trevor Bayley, the Chief Operating Officer of Green Distillation Technologies, the Australian company with world-first technology that can recycle end-of life tyres into oil, carbon and steel which is planning to open a plant in Toowoomba next year.

“End-of-life-tyres are one of those environmental problems that we seem to choose to ignore, but if you start to imagine what one million old tyres will look like you start to understand where we coming from.

“There is no market research that tells us exactly how many old tyres there are in the region but our estimates are based on the fact that there are more than four million vehicles registered in Southern and South Eastern Queensland and we know that on average a vehicle will require on average at least one new tyre each  year,” Mr Bayley said.

He said that currently old tyres from the Toowoomba area are sent to Brisbane for recycling which is mainly by cutting the tyres into pieces and sending them to landfill or grinding them into crumbs, but both methods don’t change the composition of the tyre and it will remain a tyre until eternity.

“In the case of crumbing, although some of the tyre crumb is used for sporting fields and kiddies’ playgrounds, the reality is that a considerable amount is exported for use as tyre derived fuel in China, Vietnam and India which are countries with lower environmental standards. This practice would not be permitted in Australia or other western countries as it puts noxious greenhouse destroying gas emissions into the atmosphere.

“Our proposed plant in Toowoomba is expected to commence next year and when completed will process 19,300 tonnes, or a mix of about 700,000 car and truck tyres per year, to yield approximately 8 million litres of oil, 7,700 tonnes of carbon and 2,000 tonnes of steel. The oil will go to Gladstone for refining into fuel,” he said.

“We have set an old tyre collection area of a three-hour truck radius from Toowoomba, which will take us to the Gold Coast, the New South Wales border, west to Chinchilla and include Brisbane, Ipswich, Roma and Kingaroy.

“We have discussed setting up a tyre collection transport service with Ability Enterprises of Toowoomba, which is a not-for-profit social enterprise business established to give people a second chance through employment and they are excited at the prospect,” he said.

Bruce Russell, General Manager of Ability Enterprises said that their role would require ten more permanent people and they have the capital required to purchase more trucks to do the job.

Bruce Russell, General Manager of Ability Enterprises said that their role would require ten more permanent people to be employed.

“This will be in addition to the 15 to 18 permanent staff that will be required for the tyre processing facility to be built by GDT that will cost $10 million to become fully operational and also employ local contractors during the construction stage.

“Ability Enterprises was established in November 2012 to provide employment opportunities for people who face barriers to employment with particularly emphasis on people with a lived experience of mental illness, physical disabilities, refugees and indigenous people. All our people are paid full award wages.

“Since our inception we have engaged with organisations and businesses including Toowoomba Regional Council, Roadtek, Department of Public Works, St Vincent’s Private Hospital and Nexus. The types of employment we have been able to offer to people with barriers to employment include gatehouse operations at waste management facilities, collection of soiled linen in a hospital, letterbox delivery, yardsman, administration, car washing and office maintenance/cleaning.

“So, you can see the opportunity to establish an old tyre collecting operation is one that we welcome with open arms,” he said.

As well as the estimate of end-of-life-car tyres in the three-hour Toowoomba catchment area there is also the potential for significant numbers of old truck tyres, which of course when processed yield much greater amounts of oil, carbon and steel.

Already there are two very large livestock carriers that call Warwick home, but provide a national service. The future plans for the inland rail and the creation of a $50 million transport hub are also beneficial to the business.

Lance MacManus of the Toowoomba and Surat Basin Enterprise, the industry group charged with bringing new investment to the region, said that Toowoomba was in a critical geographic position providing a logistical hub for all of Queensland and Northern New South Wales’

“The close proximity to the Inland Rail project, Wellcamp Airport and the Second Range Crossing are crucial parts of the transport and logistics infrastructure.

“As the logistical hub grows around these major projects, the need for a modern end-of-life-tyre processing facility is an essential cog in the overall plan to create a modern transport hub with the necessary support services, and will be a great addition to our region” he said.