Green Distillation Technologies has completed the pre-lodgment meetings for the proposed new Toowoomba plant, which are required before the full application for development approval and licensing.

GDT Chief Operating Officer Trevor Bayley, who attended the meetings, praised the ‘can do’ attitude and said that as no obstacles have been raised, once the formal application process has commenced it is anticipated that approval will take eight weeks, which would mean that construction could be commenced as early as September 2018 allowing commissioning of the first module in April 2019, with full production to start in December 2019. 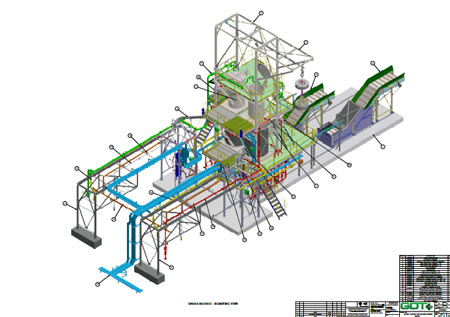 This isometric engineering perspective of the Toowoomba plant shows the single module that will be installed, but the plant has been designed so that it can be expanded to six modules.

Initially the plant will comprise a single module, which is the same as Warren, and is expected to process 19,300 tonnes, or a mix of 658,000 car and truck tyres per year, to yield approximately 7.3 million litres of oil, 7,700 tonnes of carbon and 2,800 tonnes of steel.

It is expected to cost A$9.5 million to become fully operational and employ 15 to 18 permanent staff and local contractors during construction and will be located about 10 kilometres from Toowoomba at the Wellcamp Business Park, which is adjacent to the new Brisbane West (Wellcamp) Airport that operates direct passenger flights to Sydney and Melbourne, as well as North Queensland.

The Wellcamp Business Park is owned and managed by the Wagner group, who like GDT, are innovators in an environmentally friendly industry with their Composite Fibre Technologies that is key to the production of a unique concrete substitute that will be used in the construction of the tyre recycling plant.

The new GDT facility will service a large area west of the Dividing Range close to the Second Range Crossing and the nearby transfer hub for the inland rail connection.

For several years, the GDT processing technology has attracted international visitors who want to learn more about the world-first technology that can help solve one of the biggest environmental waste disposal problems we face, as well as major investors who are interested in the viability and potential returns that can be gained. 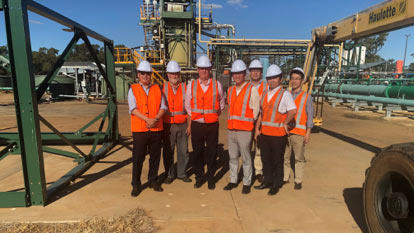 The party of Japanese visitors to the Warren plant.

So far this year we have hosted visitors to Warren from Japan and the Middle East and are expecting more from New Zealand and the United Kingdom who are seriously interested in building plants in their countries using the GDT ‘destructive distillation’ technology.

GDT Chief Operating Officer Trevor Bayley, who worked in Japan for several years and as a result understands Japanese business culture and is fluent in the Japanese language, has played a key role in these discussions.

Major investment visitors are also extremely important as we are seeking to raise funds to continue our Australian plant roll-out.

As well as site visitors, GDT received several enquiries every day from Australian and International businesses, individuals and Government wanting to know more about the process and the opportunity to building a plant in their location.

One such enquiry was from the US City of Philadelphia which is looking to revive their city after the predicted end of their coal and steel industries.

They have the work force and the land available and their strategic location, close to New York, New Jersey and Ohio. means they have access to more than 52 million end-of life tyres (based on 1 tyre per head of population) each year, plus stockpiles.

The work is being undertaken by Tytec Recycling, which is a joint venture between GDTC and Tytec.

Securing price estimates for crucial components is an essential part of the planning process so that an overall budget can be determined and the preliminary work is so encouraging so that we will start putting out tenders next month with an eye towards finishing construction by the end of the year and the completion of commissioning by the end of March 2019. 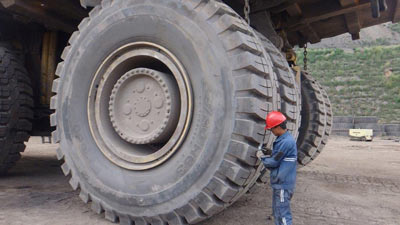 The gigantic size of a mining dump truck tyre can be gauged when compared to the man beside it. It is no wonder that recycling such a tyre using the GDT process will yield 1,600 litres of oil, 1.2 tonnes of carbon, as well as 0.7 tonnes of steel  reinforcing which can go back to the tyre manufacturer for reuse.

Oversize tyres are also known as OTR or off the road tyres, which are classified as those with rim sizes ranging from 25 to 63 inches and are used on the large mining dump trucks, quarries, road making and agricultural machinery.

The transport of tyres from mine sites around Australia to the recycling plant will be undertaken by Tytec Logistics which has over 75% of the national OTR logistics market as well as providing storage for the extra-large tyres.

The prototype unit, which will completely recycle the whole tyres and not cut or crumb the rubber, will have a capacity of 7,600 tonnes of OTR tyres per year, which will amount to over 3.6 million litres of oil, approximately 2,800 tonnes of carbon and 1,500 tonnes of steel.

The Hyder Report in 2013-14 estimated that there are 155,000 tonnes of OTR end-of-life tyres of various sizes generated in Australia each year of which 79.4 per cent are left on site as currently there is no economic and environmentally friendly method of recycling them.

The recycling benefits are considerable as by using the GDT technology a tyre that weighs 3.5 tonnes will yield 1,500 litres of oil, 1.5 tonnes of carbon, as well as the steel reinforcing which can go back to the tyre manufacturer for reuse.