It was intended that tests would also be to be conducted on a Kenworth semi-trailer, but these have had to be deferred to a later date.

The tyre oil comes from world break-through tyre recycling technology developed by Australian company Green Distillation Technologies. In 2015, they were Australia’s first ever nominee in the US International Edison Awards, the world’s top award for innovation, where they won a bronze medal.

The process, known as ‘destructive distillation’ recycles end-of-life tyres into oil, carbon and the steel bead and mesh, leaving nothing wasted and even uses a percentage of the recovered oil as the heat source.

The research was carried out by the Biofuel Engine Research Facility of QUT, under the supervision of Professor Richard Brown in association with Melbourne’s Deakin University with Dr Tim Bodisco who has Australian and United Kingdom experience with on-road vehicle testing. 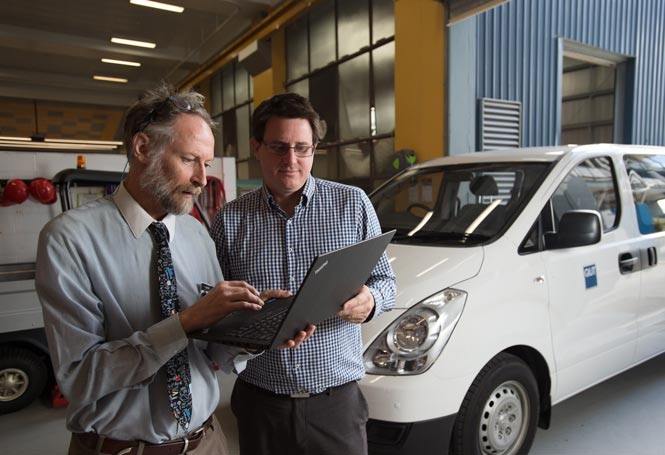 The tests were conducted in Brisbane over a two week period and included stops and starts in the city to simulate the work of a delivery vehicle, followed by hills to check performance and the CLEM7 and Airport Link tunnels for emissions, as well performance on the steep exit inclines.

The vehicle was fuelled with a mixture of ten percent recycled tyre oil and standard diesel and separate tests were conducted with 100 percent diesel to provide a comparison.

One major reason for this additional research was to validate laboratory tests undertaken last year by QUT and balance out what is now known as the ‘Volkswagen Factor’.

Dr Tim Bodisco said that the real-world on-road tests showed that emissions, in terms of nitrogen oxide per km varied much more than measurements in the laboratory and overall were found to be both higher and lower than diesel emissions depending on the traffic and environmental conditions.

“Our conclusion is that tyre oil behaves in a similar way to that of diesel and further evaluation is needed to fully understand why these fluctuations occur in real-world driving.

“Understanding this will help vehicle manufacturers and regulators to better manage vehicle emissions’” he said.

Professor Richard Brown said that the latest on-road tests extended the basic nitrogen oxide results of the previous laboratory research and showed more variability than the laboratory results and similar variability to that of diesel.

“The actual emissions of nitrogen oxides with tyre oil were sometimes higher than that of diesel and sometimes lower and the exact reasons for this will require further research.

“Nitrogen oxides contributes to photochemical smog and are closely related to particle mass emissions which need to be accounted for to have effective emission treatment systems.

“But although we have revealed some inconsistencies we haven’t seen before we are keen to investigate these further when we do the on-road tests on the semi-trailer truck under load,” Professor Brown said.

Green Distillation Technologies Chief Operating Officer Trevor Bayley said that the real point to emerge from the research is that the recycled tyre oil can be used with diesel in a vehicle without further refining.

“The oil that comes from our process is a crude oil and the on-road tests show that it can be used in this way as some critics have doubted its value.

“It also points the way to the future that with further processing it can become the base for diesel, petrol, aviation fuel or any other petroleum based product.

“There are 1.5 billion tonnes of tyres discarded globally each year with Australia generating around 55 million disused tyres a year by 2020 and the USA more than 200 million.

“Getting rid of old tyres in an environmentally-friendly way is a universal nightmare for authorities. Stockpiles of used tyres around the world are a health hazard, as a result of fires at tyre dumps which are difficult to put out and generate huge amounts of toxic smoke and in tropical areas old tyres are a breeding ground for mosquitoes that carry the Zika virus, dengue fever and malaria.

“We have operated a pilot plant in Warren in Western New South Wales since 2009 and we plan to upgrade to a full production plant which will see it capable of processing 19,000 tonnes, or a mix of 658,000 car and truck tyres per year,” Mr Bayley said.

About QUT: QUT is a major Australian university with a global outlook and a ‘real-world’ focus. It is ranked by Times Higher Education as one of Australia’s top universities under 50 years old, one of the nation’s fastest growing research universities and its courses are in high demand. QUT graduates include eight Rhodes Scholars, five of whom were awarded in the past seven years.

About Deakin University: Founded in 1974, Deakin is one of Australia’s leading tertiary education providers, has won numerous awards and teaches over 53,000 students each year. It is a globally connected university, with five popular campuses, including the online Cloud Campus and technology-rich learning centres across outer metropolitan Melbourne.

About Green Distillation Technologies: GDT is an Australian company which has developed world-first technology to recycle end‐of‐life car, truck and oversize tyres into carbon, oil and steel.