Hundreds of tires have been illegally dumped in Shreveport and Caddo Parish, posing health problems and eyesores.

Drive past one of those small “Mom and Pop” tire shops that sits on the outskirts of city streets, forlornly cheerful with brightly colored and often handwritten signs.

Continue down a side street for one or two miles, until you find a vacant plot, a number of adjudicated properties or a dead end street, preferably by a stretch of once pristine woods. 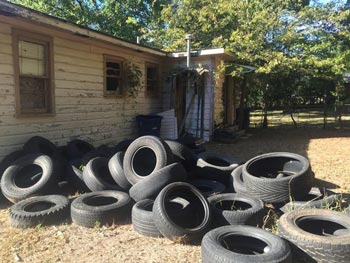 There, you will most likely find dozens to hundreds of illegally dumped tires.

“The illegal disposal of tires continues to be a growing problem within the City of Shreveport,” said the city’s Chief Building Officer Gary Norman. “It’s easier and cheaper to illegally dump the tires.”

Hundreds of illegally dumped tires around Caddo Parish pose more than just pockets of eyesores. They also cause serious health and environmental risks.

“Tires hold water, which allows a place for mosquitoes to breed,” Norman said. “It also provides cover for rats, snakes and other animals.” 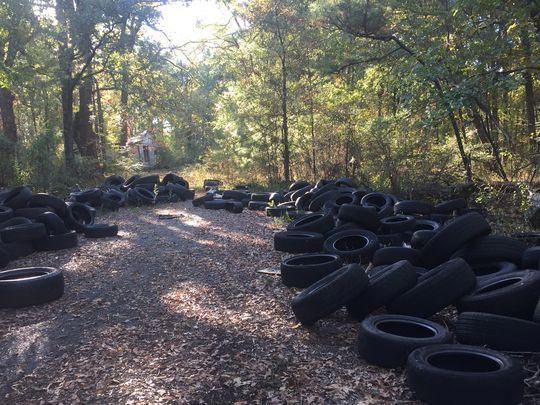 Hundreds of tires dumped illegally near adjudicated properties in the 2800 block of Jamison in Shreveport. (Photo: Lex Talamo/The Times)

A 12-minute drive from the heart of downtown Shreveport, Jamison Street dead ends next to a blighted property with peeling white paint, broken windows and a single tire standing sentinel at the property’s sagging entrance.

Another blighted property sits about 100 meters away. The stretch of cracked asphalt in between the two buildings is littered with hundreds of illegally dumped tires.

“There are areas of town that are affected more than others, and generally it relates to finding a place secluded enough to quickly dump the tires,” Norman said. “Most of the time, it is a dead end street or wooded areas that offer cover to dump the tires.”

Another illegal dumping hotspot is along the 500 block of Woodrow Street, where at least 100 tires have been dumped in a vacant lot next to several residential homes.

Thurman Ward, a resident on the street , said he didn’t appreciate the dumping ground next to his home.

” I don’t know who dumped them there, but they aren’t supposed to be there,” he said. “It’s not right. It’s an eye sore.” 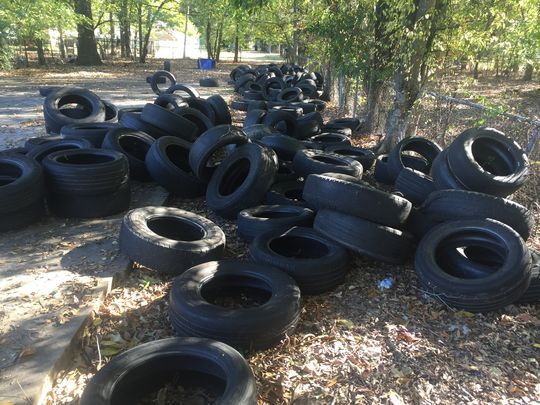 Tires dumped illegally in the vacant lot beside a number of residential houses on the 500 block of Woodrow in Shreveport. (Photo: Lex Talamo/The Times)

Visits to West 63rd Street, West 65th Street, and Wallace Avenue in Shreveport found dumps next to residential areas, where children were playing basketball in the streets.

A trek to the 4000 block of Wallace Avenue yielded similar results. Dozens of tires were stacked in a scattered pile behind a blighted property — with some windows boarded and others smashed.

Small tire shops sat within a five-mile radius of all dump sites visited by The Times, often in neglected pockets near people’s homes.

Parish and city officials said the most likely cause of the tire dumping — due to the sheer number — are “mom and pop” tire shops that can’t afford to properly dispose of the tires. 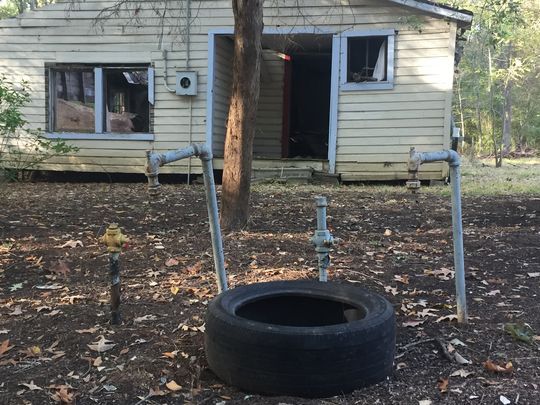 An illegally dumped tire, one of hundreds, near an adjudicated property in the 2800 block of Jamison in Shreveport. (Photo: Lex Talamo/The Times)

Norman said many local tire businesses that collect the disposal fee “just pocket the money and dump the tires wherever possible.” He added that illegal dumpers also target the outdoor waste bins of businesses that are closed on weekends, forcing those businesses to pay extra for the tires’ disposal.

“We know most of the problem stems from businesses, due to the number of tires being dumped at one time,” he said. “A lot of the illegal disposal happens on Sunday, while we are not at work.” 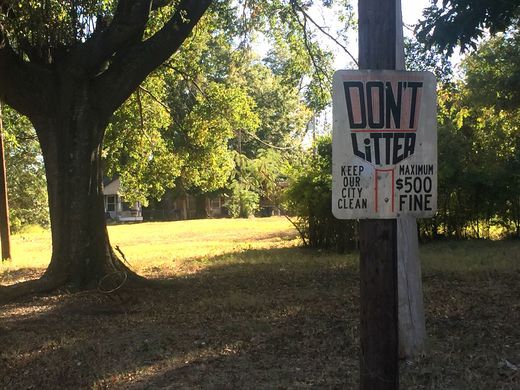 Krystle Grindley, spokeswoman for Caddo Parish, said tires have been dumped illegally parish-wide, including on the outskirts of the city and along parish roads.

“We all want a clean parish and community, and illegal dumping of items, such as tires, does not help us fulfill that goal,” Grindley wrote in an email.

“They harbor and breed mosquitoes,” she said. “They also harbor snakes. If they catch on fire, they can burn for months, polluting the air with chemicals, (and) the fires are extremely difficult to extinguish.” 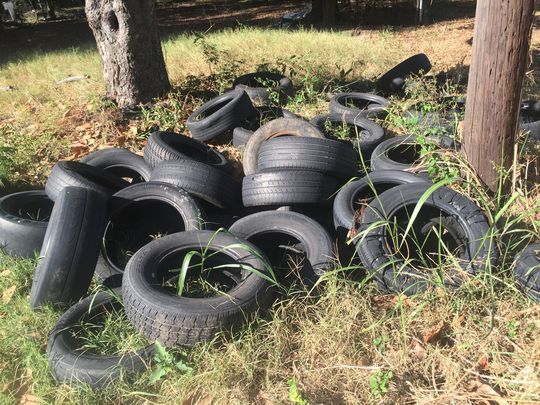 Tires dumped illegally near a residential area in the 400 block of W. 65th St in Shreveport. (Photo: Lex Talamo/The Times)

Members of the public who responded to questions about tire dumping said the cost of properly disposing of tires the lack of legal dumping grounds most likely leads to illegal dumping.

“It’s always been a problem because there isn’t a place to dispose of them,” said Shreveport resident Trey Thames. “There are too many roadside tire shops that don’t spend the money to have them disposed of properly.”

Some residents have stepped up. Reed Ebarb, a Greenwood a real estate agent, learned of more than a hundred tires dumped in the Highland neighborhood. He asked on social media for volunteers to help remove them. Then, on Sept. 16, he set out with his truck for some heavy-duty cleanup.

“We picked up 76 tires from a dumping area in Highland, removing not only an eyesore but an awful mosquito breeding ground as well,” Ebarb said. “We have at least 70 or 80 more to pick up.”

Despite the tire problem, Ebarb said it was “awesome” that he had help in efforts to beautify the city.

“A lot of times on Facebook, people are negative. But with this, I put it out on Facebook and people just showed up,” he said. “It was the coolest thing, to see people come out to help and excited to help.”

Ebarb has placed several cameras near the Highland dumping ground, to catch dumpers, who could face fines of $500 to $5,000 if caught. He worked closely with Shreveport Green to properly dispose of the tires.

The nonprofit also collected 750 tires at its most recent Great American Cleanup, using grant money to pay a recycler to take the tires. She said hiring an out-of-town company to dispose tires costs about $2 per tire.

“You can see how expensive that can be for us,” she said. “Tire dumps are probably the biggest and most expensive problem we have.”

Curtis estimated there were “thousands” of tires dumped illegally throughout the city.

“We can’t begin to address without the (Louisiana Department of Environmental Quality) or at least the city’s help. And the city helps us with a lot,” Curtis said.

Shreveport Green also works with the city to dispose tires but has agreed not to overload it,Curtis said.

“They (tires) are very difficult to manage. The city can cut them in two and put them in the landfill, but that’s not the best option,” Curtis said. “The city has to absorb the cost of all the thousands of other tires that are dumped.”

Twenty years ago, she said, the state started charging a $2-per-tire recycling fee, included in the cost of purchased tires. The money went into a state government fund to reimburse tire recyclers, but the fund ran out during the the administration of Gov. Bobby Jindal, Curtis said.

“We have had the police involved, as well as the (Louisiana Department of Environmental Quality) for several years, trying to put a lid on it,” Curtis said. “But until some of the regulations are changed, it’s going to continue to be extremely difficult to get control of.”

Jean Kelly, spokeswoman for the Louisiana Department of Environmental Quality, said the agency conducted sweeps in March 2016 in collaboration with the Shreveport Police Department.

Kelly said that to report illegal dumping, call the agency’s Single Point of Contact line on the LDEQ website or call 225-219-3640 or 1-888-763-5424 to report. The agency’s criminal investigation section then looks into the complaint.

Norman said the city Solid Waste and Property Standards departments work with Shreveport Green and others to offer opportunities for citizens to dispose of tires properly. 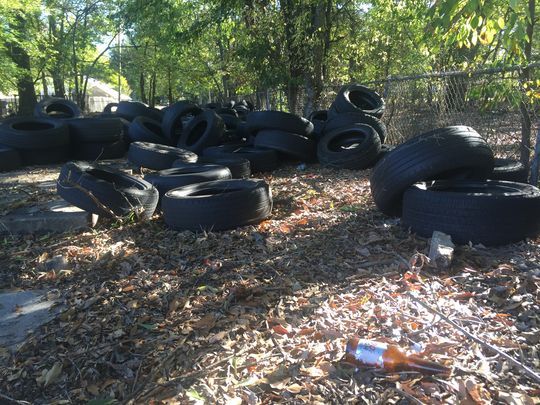 Tires dumped illegally in the vacant lot beside a number of residential houses on the 500 block of Woodrow in Shreveport. (Photo: Lex Talamo/The Times)

“We attempt to get the sites cleaned up as quickly as possible to prevent them from becoming a magnet for more dumping,” he said.

Grindley said the parish has 17 compactor sites outside of city limits where parish residents can dispose of items, including tires. Residents who fill out the proper paperwork can drop off up to five tires, Grindley said.

The parish also has brochures and fliers available of acceptable items, times and locations for dropoff, available through the parish department, the compactor sites and on the parish website, Grindley said.

Article reproduced with kind permission by the Shreveport Times – you can find the original article here.