News of the research into the properties of the oil produced by the ‘Destructive Distillation’ process, conducted by the Queensland University of Technology has swept the world and firmly placed GDT and their world-first tyre recycling technology on the world stage. 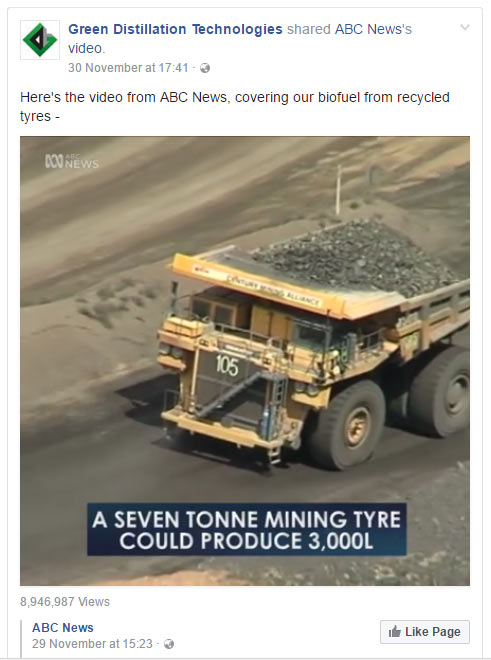 The research, which found that when mixed with varying percentages of fossil fuel diesel the GDT oil from recycled tyres delivered similar performance, but thirty per cent less nitrous oxides, which contributes to photochemical smog and lower particle mass than 100% oil from fossil sources.

The initial story was done by ABC TV Brisbane and also telecast by ABC News 24 and so far has had 8,946,987 views while generating 144,109 comments on Facebook. The comments tally is particularly interesting as it is an indication of the massive depth of interest in the subject for someone to stop and write a comment on the Facebook site:

This story has also been posted on both the GDT and QUT sites and has generated a further 177,000 hits.

This story acted as a catalyst for international interest including an interview on the BBC’s Radio 4 with GDT COO Trevor Bayley: http://www.bbc.co.uk/programmes/b0848m8x

The Guardian also took up the story: https://www.theguardian.com/sustainable-business/2016/dec/16/transforming-waste-into-fuel-with-australian-innovations-from-tyres-to-sugar-cane-and-agave

The media that covers the world environmental and recycling industries were also interested in the story: http://www.recyclinginternational.com/recycling-news/10176/plastic-and-rubber/australia/oil-recycled-tyres-means-less-emissions-scientists-claim

Recycling International will also run an extended version of the story on page one in their first issue in 2017.

This will be repeated by numerous other media outlets in Australia and internationally in 2017 as the story gains further traction and additional GDT developments can help maintain the news momentum.

Profile: The Baron of Warren

Technical Director Denis Randal could be called the ‘Baron of Warren’ not because he is seen as a local feudal chieftain, but because of the regard in which he is held by the small town in Western New South Wales that he now calls home and is the location of GDT’s processing plant.

Warren extended a welcoming hand when the fledgling GDT was looking for a home in 2009 and offered a rent free location at the showgrounds where the first experiments took place.

In some ways they have been repaid today as GDT is the second largest employer in the town after the Council itself.

Although Denis is critical of organised academia today, his achievements are outstanding.   After leaving school he secured a scholarship from BHP and after obtaining a Bsc in Chemistry he switched to Metallurgy where he also obtained a BSc. He moved to South East Asia and worked in the oil and palm oil industries in Indonesia, Singapore and Malaysia and was awarded a PhD in micro-biology from the University of Virginia while he was working with Conico. His broad experience includes implementation of systems in the oil industry, management of waste wood in Singapore, palm oil processing, waste water and other liquid management.

He returned to Australia ten years ago and was working in wood to gas technology, as well as converting agricultural waste to oil when he was asked if he could convert old car tyres to oil and carbon and the rest is history.

MinExpo: We spoke to them all 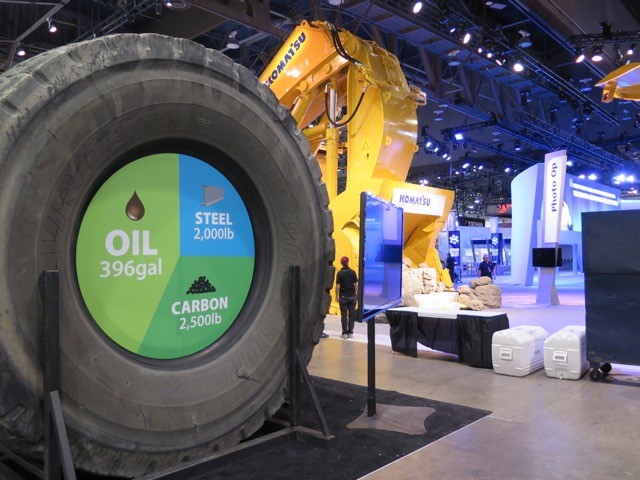 According to GDT’s Trevor Bayley, there were 20,000 visitors at MinExpo, the world’s biggest mining show and he and Craig Dunn, along with colleagues Brett Fennel and Paul Walker from Tytec, spoke to them all.

GDT were part of the Tytec Recycling stand, the company which they jointly own in the development of a plant to recycle ‘Off the Road’ (OTR) oversize tyres.

“We had one visitor from the Philippines who seemed to come to the stand every one of the three days, each time with another business colleague and he described our stand as ‘the best of the show’. We also had the opportunity of meeting senior executives of some of the world’s major tyre manufacturers.

“We have received enquiries from most of the world’s major mining countries such as Mexico, Columbia, Brazil, Canada, the United States and Chile and the potential market in these countries is immense.

“For example one South American mine operator has more dump trucks than all those operating in Australia today,” Trevor Bayley said.

The latest from Warren

Major upgrades to module#6 are being completed to confirm the results of commissioning trials to date.

The Tytec mining tyre unit, which has been developed horizontal to the ground to handle these giant tyres that weigh up to 4 tonnes, has proven that the process works in this position and we now need to start work on refining it to make it economically attractive.

However, there has been an unusual amount of rain in the Warren area through spring resulting in several road closures and an unfortunate reduction in production days.

Nonetheless, as summer flew in, the large volume of water laying around brought with it an increase in insect activity in the form of swarms of mosquitos turning Warren into a difficult working environment.

The GTD team on site have soldiered through it all and continue to do a good job for us.