QUT mechanical engineers tested the oil that, when blended with diesel in small percentages, gives a fuel that reduces emissions and with no loss of engine performance. The percentage of fossil fuel was varied during the tests and will continue to be in subsequent testing.

The tyre oil comes from new tyre recycling technology and is a world break-through that was developed by Australian company Green Distillation Technologies. They were Australia’s first ever nominee in the US International Edison Awards last year, the world’s top award for innovation where they won a bronze medal.

The process recycles end-of-life tyres into oil, carbon and steel, leaving nothing wasted and even uses some of the recovered oil as the heat source. 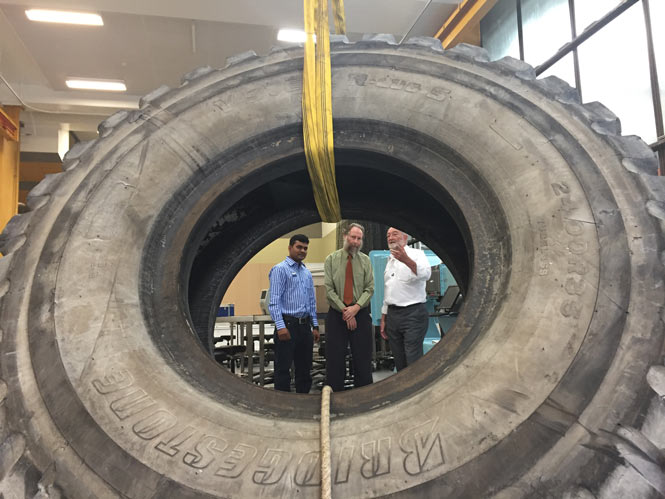 “There are 1.5 billion tonnes of tyres discarded globally each year and Australia, alone, generates around 55 million disused tyres a year by 2020, while the USA more than 200 million,” Mr Hossain said.

“Getting rid of old tyres in an environmentally-friendly way is a universal nightmare for authorities. Stockpiles of used tyres around the world are a health hazard, as demonstrated by the recent Broadmeadows fire in Victoria which was difficult to put out and generated huge amounts of toxic smoke and in tropical areas old tyres are a breeding ground for mosquitoes that carry the Zika virus, dengue fever and malaria.”

“We tested the tyre oil blends in a turbocharged, common rail, direct injection, six-cylinder engine at the Biofuel Engine Research Facility at QUT. The engine is typical of engine types used in the transport industry.

“Our experiments were performed with a constant speed and four different engine loads of 25, 50, 75 and 100 per cent of full load.

“We found a 30 per cent reduction in nitrogen oxide which contributes to photochemical smog, and lower particle mass which means fewer problems for emission treatment systems.

“We also found the performance of the oil blends were consistent through all of the blends and will continue this testing in subsequent research,” Mr Hossain said.

Green Distillation Technologies Chief Operating Officer Trevor Bayley said that up to this stage they had believed the oil from the recycled tyres could be used without refinement as a heating fuel or further refined into automotive or aviation jet fuel, but the QUT research could change this assumption.

“We are delighted at the findings of the QUT research as it will help us promote the sustainable use for end-of-life tyres, as it has already been found by refinery Southern Oil that our oil from recycled tyres has been overlooked as a potential biofuel source, yet they say it is the most reliable and easiest to refine of all.

“They have said that the future potential of this source of feedstock is immense, in fact preferable to other bio-oils from plants or algae, plus it will reduce Australia’s dependence on imported fuel and it is an excellent example of converting an environmental waste problem into a valuable raw material.

“We have operated a pilot plant in Warren in Western New South Wales since 2009 and we plan to upgrade to a full production plant which will see it capable of processing 19,000 tonnes, or a mix of 658,000 car and truck tyres per year,” Mr Bayley said.

“We have been studying the logistics of how to handle those extra-large ‘off the road’ tyres (OTRs) that are used by heavy duty mining dump trucks, large agricultural tractors and road making equipment. The 2013-14 Hider Report estimated that each year there are 155,000 tonnes of these OTR end-of-life tyres of various sizes generated in Australia of which 79.4 per cent are left on site as there are no means of recycling them.

“We attended the international mining industry expo in Los Vegas in September and found enormous interest in our process from other countries with the same oversize tyre disposal problem, such as Canada, the United States, Mexico, Brazil and the other South American countries where mining is a major industry.

“GDT plans to have the first fully operational commercial plant delivering 8 million litres of oil from recycled tyres per year commencing mid-2017, followed by the first in the world mining tyre processing plant in either Qld or WA,” Mr Bayley said.